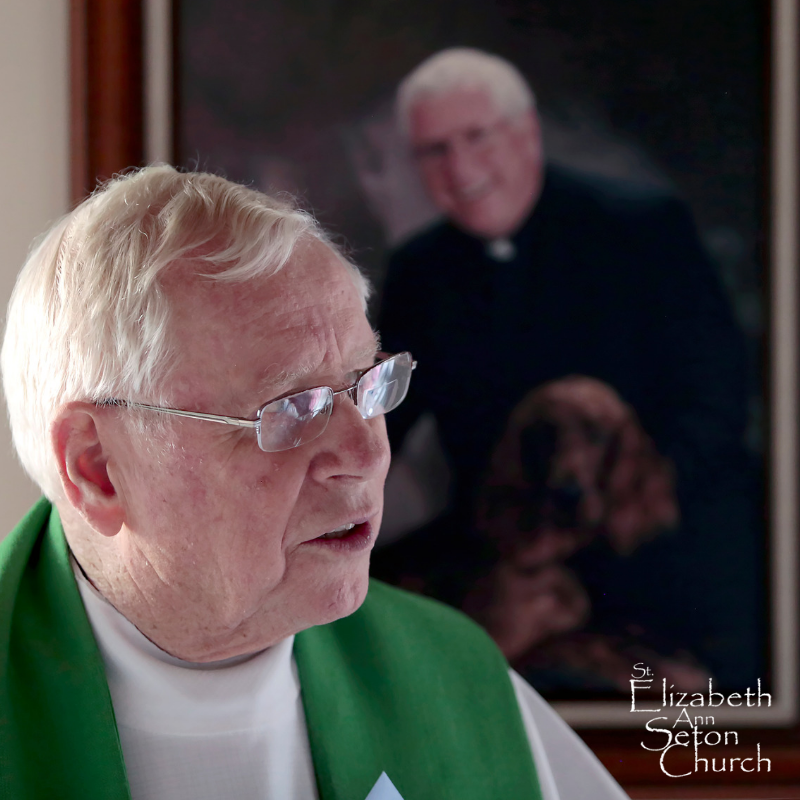 Fr. John, a priest of the diocese for 63 years, was a native of Our Lady of Solace Church in Syracuse and a graduate of Central High School. He studied at Le Moyne College and St. Bernard’s Seminary. Father Finnegan was ordained for the diocese on February 2, 1956. His more than six decades of ministry included service as assistant pastor of St. Rose of Lima Church in North Syracuse, the Cathedral of the Immaculate Conception in Syracuse and Our Lady of Lourdes in Utica; pastor and co-pastor of St. James Church in Syracuse; founding pastor of St. Elizabeth Ann Seton Church in Baldwinsville; pastor of St. Joseph’s Church in Camillus; and following his retirement in 2003, administrator of St. Mary’s Church in Jamesville and St. Elizabeth Ann Seton, a position he held from 2005 to 2017. Father Finnegan also served as Newman Center Chaplain at Mohawk Valley Community College in Utica and Hamilton College in Clinton. He also served as a chaplain to the City-County Jail in Syracuse and as a member of the Ecumenical Commission. Father Finnegan found Heaven on Earth in Skaneateles for the majority of his life.

He shared his love for “the lake” with all of his family and countless friends for many years. His Sunday dinners, both at the lake and his town home were nothing short of gourmet and enjoyed by all who happened to drive, swim or float by around dinner time. As with his family, Father developed a deep love and compassion for all of his Irish Setter companions over the last 40 years. Brian Boru, Rory O’Connor, Danny Boy, Aidan, Colum, Devlin and Declan, were all also family members in every sense of the word and treated as such. Their menus were certainly not limited to any of the major dog food brands and their lives were not those of typical canines. They may literally have been the only dogs with their own envelopes, making regular contributions each week as well as to the Diocesan Support Appeal each year.

Friends may call Friday, May 3 from 5 to 7 p.m. at St. Elizabeth Ann Seton Church. All are welcome to a Vigil service at 7 p.m. A funeral Mass will be celebrated Saturday, May 4 at 10 a.m. in the church with the Most Rev. Robert J. Cunningham as the main celebrant. The Catechism of the Catholic Church teaches that it is a “noble and meritorious act” (#2296) for persons to donate their entire bodies to science or to a medical school for use by students studying to become physicians. Fr. John made that choice and donated his body to Upstate Medical Center. However, this process requires the body to be transferred immediately after death to the medical institution. Consequently, having his body and an open casket present for the funeral service, traditional for priests, is not possible. Family and friends are grateful for the compassionate care Fr. John received at Syracuse Home and Crouse Hospital’s 4 North Irving Unit. Contributions in Father John’s memory may be made to St. Elizabeth Ann Seton Church.